Outrage. Hatred. These are not normally words you would say are the way forward for a brand. In the past, a brand has always tried to have a position that was not controversial. A position where you attacked your competitors and nobody else. You stayed in your lane. Stuck to your knitting.

I was interviewed last week about the new Nike ad and what I thought would happen. I believed that it had been thoroughly thought through and was going to be very good for business. It has been. In the last 72 hours online sales of Nike have gone up 31% globally. So it has worked so far. But time will tell.

All of these things are interesting. However, there are literally thousands of articles that have been written in the last 4 days about these facts.

I decided to go somewhere else. I started to think about the similarities between the combatants of this story. The similarities between the outrage Nike was experiencing and the outrage Donald Trump created every day. It almost felt like a new blueprint. A blueprint, the public and the media seem to adhere to in terms of time and attention. The 24 hour news cycle has a lot to answer for. But perhaps, it is a new way to connect. Could outrage be a new structure to reach people that are saturated by the endless stream of mundane information that is fired towards them?

I started to wonder if Donald Trump had created a new rhythm in the media. Is this why he has succeeded so far? He harvests outrage. He creates emotion.

It would seem every week Mr Trump would have a new controversy and about a week later the world moved on to the next thing. I also wondered in the modern media landscape how long outrage lasts. I wondered how long it would last in Nike’s case. 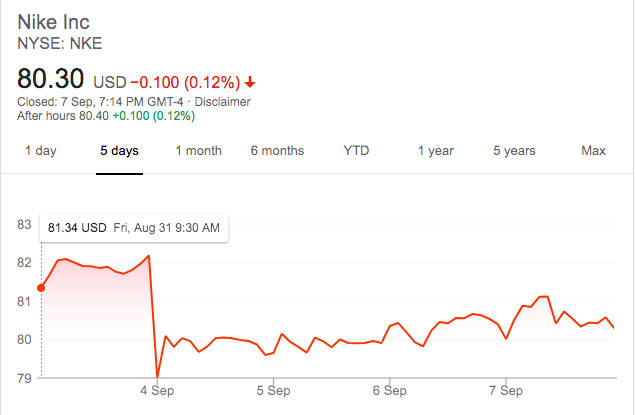 As it turns out about 4 days. On the 4th of September, the share price dropped when the campaign started to run. Ever since then, the price has slowly risen. Think about that for a minute. A brand takes a position that is definitely unliked by the President of the United States and many people in the country. Now 10 and maybe even 5 years ago this would have been corporate suicide. Today, not so much.

Today, perhaps a brand needs an enemy. A target. A strong purpose and voice. Maybe a strong perspective is required in a world where we move onto the next thing every 24 hours. A point of view that might not be universally loved might come in handy because it forces people to have an opinion and pick a side. At the very least, it makes them care.

So, is there a place for outrage and anger when it comes to brands? Perhaps not for everybody. But, I do believe that in the modern media landscape if you are in the middle of the road you will get run over. I think Nike gave us a glimpse of the future. A future where being noticed is going to be very difficult. Brands will have to say something or do something of considerable consequence. Or, at the very least, make you feel a whole lot.

Many believe what Nike did was incredibly risky. I think a far greater risk is not having a point of view or perspective. Outrage is a risk. So is invisibility.

Being noticed in this world is getting harder and harder. And if there is one thing you can say about Donald Trump and Nike is they both get noticed. You might not like one of them but you know about both of them.

They are both doing the same dance.

They are just listening to very different types of music.

2 thoughts on “Advertising. The Tango of Donald Trump and Nike.”