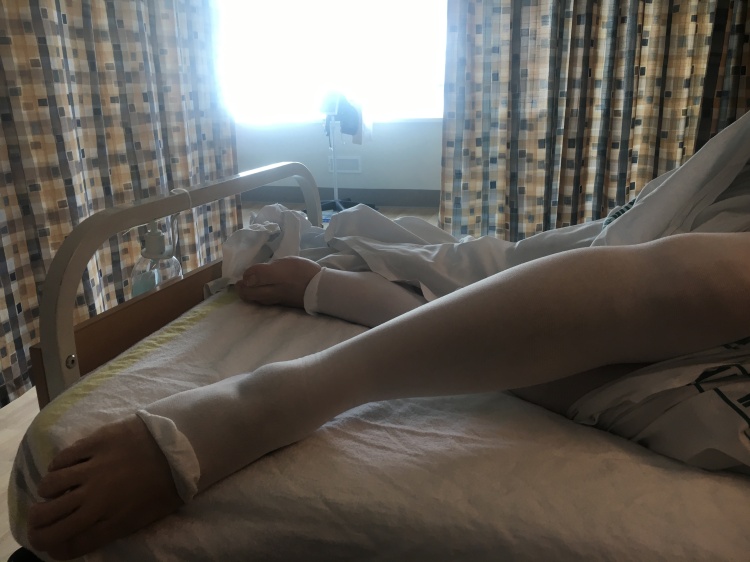 Nothing reminds you of your love for advertising more than lying next to a man discussing the insertion of his catheter with his best friend.

It has been an interesting two weeks. I had been in hospital because my appendix was trying to kill me. Auckland City Hospital looks like it was decorated by an East German Dictator who discovered he had no creative ability and a large amount of grey paint left over from painting his tanks. But I shouldn’t grumble, the magnificent and dedicated people there saved my life. And for that, I will forever be grateful. And they deserve better decor.

There are a number of strange things you discover in a hospital. For example, I had no idea how many different places they can take blood out of your body. I won’t go into detail in case a hipster throws up. Or, the fact that my legs look magnificent in compression stockings (photographic evidence supplied above) and I may now wear them on weekends. I also discovered how the thinnest curtain creates remarkable honesty. When you are in a ward and you are only separated by a thin curtain from the next patient some of the conversations like the one mentioned above are truly eye watering. The unvarnished truth. I was being allowed to hear things that once the curtain was opened were never discussed. The raw truth replaced by polite conversation

While this was happening I was taking some excellent opiate painkillers. My brain learnt to do the tango in a single afternoon. Once it stopped swaying, I started to think about thin curtains, honesty and what it gives you. I also thought about what honesty could do for advertising.

I have judged a few ad shows around the world this year. One of the things I noticed was how many pieces of the work were the same. And, I am talking about hundreds of pieces, the same scenarios, the same resolves, the same half funny gags and the same looking people in the same looking house. They are generic. They are inoffensive. Nobody will ever notice them. Perhaps, this is what some people want but I find it hard to believe considering the money that is spent. The question is why does it happen?

As my drugs kicked in and the hospital ceiling floated away I strangely thought about Donald Trump. Nobody predicted he would win, but he did. The reason all the so-called experts say this happened is because what people were thinking and feeling was very different from what they were saying. They didn’t feel like they could be honest. But once they got behind their curtain they were surprisingly honest.

What they were saying was not what they were thinking and feeling. They went from an acceptable generic lie to a specific truth.

The process ads go through create this same result. Everything becomes sanitised, inoffensive and generic. There are many global pieces of work that have gone through round after round of pummeling and what you end up with is something that doesn’t upset anybody but doesn’t surprise and delight anybody either. I call them CNN ads. Watch CNN and look at the ads. Large budgets desperately trying to hide bland work.

Great work that connects normally has something specific about it. There is something unusual, something unique. Something you have never seen. Think of your favourite piece of work. Whether it’s Cadbury Gorilla, Paralympics, Under Armour, John Lewis or the Harvey Nichols work from last year they all had some risk, originality and memorability. Somebody also had to be brave enough to buy it and make it.

The process ads go through often try to eliminate the very specific things that make work memorable because they are dangerous and this is often why work looks so generic. However, are we getting honest answers from people about what they find offensive and risky? Are they telling us the truth?

Do those people also give completely different answers when it comes to ads because it is what they think is acceptable? Have we built an entire industry based on what people think they should say instead of how they actually feel? How much honesty are we getting from consumers? How reliable is the data?

Are these the ads people really want? And before you say nobody wants to look at ads the John Lewis Boxer ad has been watched over 20 million times in a month on YouTube and shared almost 2 million times. A bit of quality and originality and people don’t care that it’s an ad. They will watch it because they like it.

Have we created an industry that has rules that create a certain outcome? Is that outcome going to work in the future? I know those are a lot of questions but hey, right now, I am on medication that doesn’t me allow to operate heavy machinery.

All I know is that the vast amount of work that comes out of our industry at the moment is not great and not future-proof. It is often banal. The amount of it also tells me it is not an accident. It has to be a desired outcome from perhaps a very flawed process. The question is, does the consumer want it? And if the answer is no what are we going to do about it?

My belief is there has to be a shift in how we make things. There has to be a desire to change the standard and who we measure ourselves against. Average is not OK. There is too much competition for people’s attention to carry on making work that nobody notices.

And, before you say nothing can change, Donald Trump is the President of the United States.

Right, time for another tablet and a lovely chat with a man about his colon.