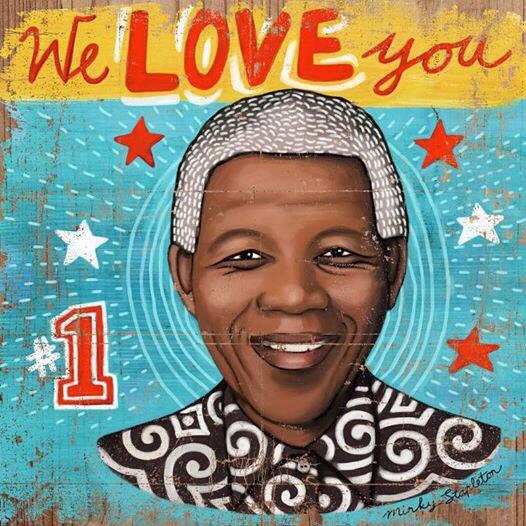 I met Nelson Mandela twice. Each time it was fleeting but those 11 seconds have stayed with me. The second time was about 4 seconds long and we were completely alone. I was working at an agency called TBWA Gavin Reddy in Houghton in Johannesburg. Houghton was the suburb where Mandela lived.

I was walking to work early one morning because my Beetle had broken down for the third time that month. I was walking down a road and not really looking up. I sensed somebody in front of me. About 10 metres away stood Nelson Mandela. His bodyguards were a little way back. He was going for a walk. I was going for a walk. We were walking. We were alone on an empty street. Fuck. What do I do?

You get this stupid shit eating grin on your face when you meet famous people don’t you? And Mandela is much more than that. My grin must have been especially shit eating that day. You just don’t know what to do. I couldn’t speak. I put out my hand, he shook it. I said good morning in that voice you have before coffee. You know raspy and high pitched. Ridiculous. He had that massive smile. He could see this was weird and saw the humour. He said good morning and looked into my eyes when he spoke. And then he was gone. And I was standing there alone on a beautiful Tuesday morning. It had all happened in about 4 seconds.

But I had met him before.

In 1990 I was a photographer in Durban. At the time I was 20 years old and politically naive. I was asked to take some pictures of Nelson Mandela at the book launch of Fatima Meer at the University of Natal. I was near the stage. We used film in those days, so I was loading my camera with my back to the entrance.

Suddenly, there was a sound that I hadn’t heard before or haven’t heard since.

It was a mixture of roaring and intake of breath. It is the sound you make when language cannot help you. It was very human. It was the crowd. Up until that moment I don’t think I really understood what Nelson Mandela meant to people. As he walked in people collapsed. They were rolling on the floor. People were ululating. Women and men were crying. Collective, pure, raw emotion. In a single second a normal university auditorium had been turned into the most powerful gospel revival you have ever seen.

In that instant, I realised that I knew nothing about the country I lived in.

I had to get pictures of him speaking, which I did. But I wanted to try and get a picture of him. It became this burning need as I listened to him speak. A portrait as opposed to something for a PR release. I didn’t want to just take a photograph I wanted to make some sort of connection. I thought the only chance would be on the way to his car afterwards. He finished his speech and I followed him through the crowd until we were both outside. I was completely inexperienced. I didn’t know what to do. I was beginning to panic. As he got into his car I remembered him giving an ANC salute (raised fist) when he walked into the auditorium.

For a brief moment everything fell into place. He was sitting in the backseat and looked at me through the window. I lifted my arm and did probably the worst, uncool ANC salute in history. I didn’t understand its significance or its meaning. I was out of my depth. He looked at me and my fist. He understood everything. I was a dumb, shy, white kid who really needed a picture and was trying to connect but didn’t know how.

He didn’t look at the camera, he looked at me. And when I say me, straight into my eyes. This single second felt like an hour. He started to laugh and raised his arm. He gave me the picture. He waited until I shot it and then told the driver to go. 7 seconds. 7 seconds, that tell you everything about his greatness.

His incredible strength and power never got in the way of his humour and his ability to make time for everybody. His humanity was on the outside. For most of us it is on the inside.

I handed the pictures over and I don’t know where they are today. Strangely, I don’t feel sad about the loss. The memory for me is so strong and personal it has become more valuable than the photograph. And trust me coming from a photographer that is saying something. There is just this lingering memory of potential. Of what we all could be if we were a little kinder to each other.

In 7 seconds he made me feel like it was going to be OK. He gave me some of his humaness. He could have looked away and told the driver to go but he didn’t. He understood my situation and accepted me as I was. There was no judgement or irritation. He solved it with humour and time.

He had the greatest gift of all. In that moment, he showed me what true greatness is. To simply be human. And he did it with the world on his shoulders.

It was only eleven seconds but I am grateful for each one. I will never meet a man like Nelson Mandela again.